A (snow)storm in a teacup 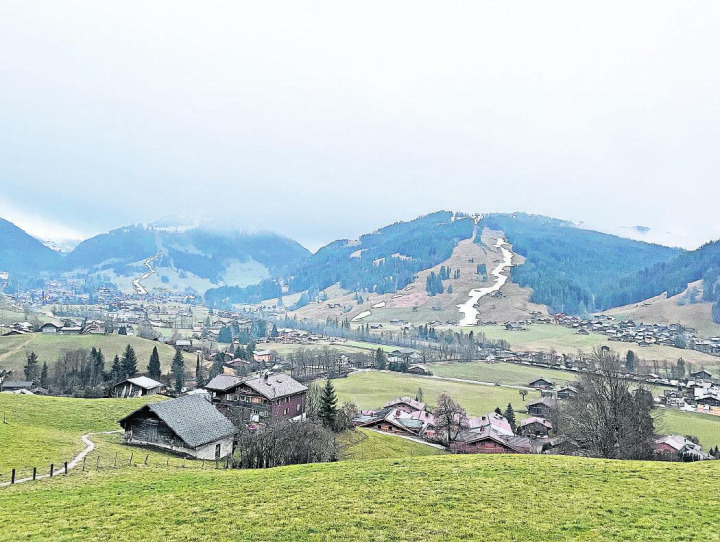 Photograph: Rasmus Wolff | Photo from early January confirms what was obvious for all - there was more green, than the usual white.

The first week of January, this year, must have been an exceptionally slow news week since the joint media squad jumped on the heliwaggon! Besides from local Swiss newspapers covering the helicopter snow-dumping that happened on 27 December, the international press also picked up on the story that quickly spun out of proportion.

The outcry in the media was heated. Gstaad had flown in snow with a helicopter, a Swiss daily newspaper headlined and labelled it “drastic measures”. A perfect pitch for great indignation on social media.

The New York Times, The Times, The Guardian, BBC, The Mirror, Daily Mail, Sky News, Daily Express, Reddit, Bloomberg and the Weather Channel – were already debating whether green Christmas was the future of the alps as a snowless winter in Europe set in when temperatures rose to double digits. As cherry trees started to bloom in Poland, the ski resorts in the alps desperately tried to patch the green spots on the slopes with artificial snow.

But high temperatures of around 10 Celsius make it impossible to use snow cannons to cover the slopes in the lower areas. Winter sports fans are notoriously drawn to the mountains for the pristine environments, energising views, pure air and of course, hearty fun in the snow. Therefore, officials had to get creative to keep the slopes open during the Christmas and New Year holidays. But what was really behind this heli dumping action, and where did this snow come from?

Eight short helicopter flights
Matthias In-Albon, the managing director of BDG (the mountain railway company), has shed some light on the helicopter action. Due to the persistent downpour and the warm temperatures around Christmas, a ditch had formed in the connecting piste on the Oesch side between Zweisimmen and the Saanersloch. Pipes had been laid out to allow all the water to drain, and these pipes had to be covered again with snow. “We still had snow in a depot nearby,” explains In-Albon. Normally snow would have been brought from the depot with snow groomers and pushed over the existing piste to cover the damaged area. But this was not feasible due to the thin snow cover. So, BDG decided to fly the snow from the nearby depot to the damaged area by helicopter. “Only eight short rotations were flown in total,” In-Albon says, correcting the false reports in various media. Because of this action, the piste could be kept open over the busy festive season.

Fake news and Gstaad is always popular clickbait
BDG employees have worked day and night with shovels, excavators and snow groomers during the last weeks of December to make the ski slopes fit for use. “We all put in an enormous amount of work to give skiing enthusiasts what they want,” says In-Albon. The use of the helicopter was comparatively small, if not a diminishing small part, compared to all the hours worked and effort spent in salvaging the pistes. Nevertheless, Matthias In-Albon, understands the readers’ excitement and uproar. But, as he emphasises, it was still based on false facts, and “it’s unserious journalism in search of headlines during a festive season that is otherwise void of topics.”

BASED ON AVS | KEREM MAURER