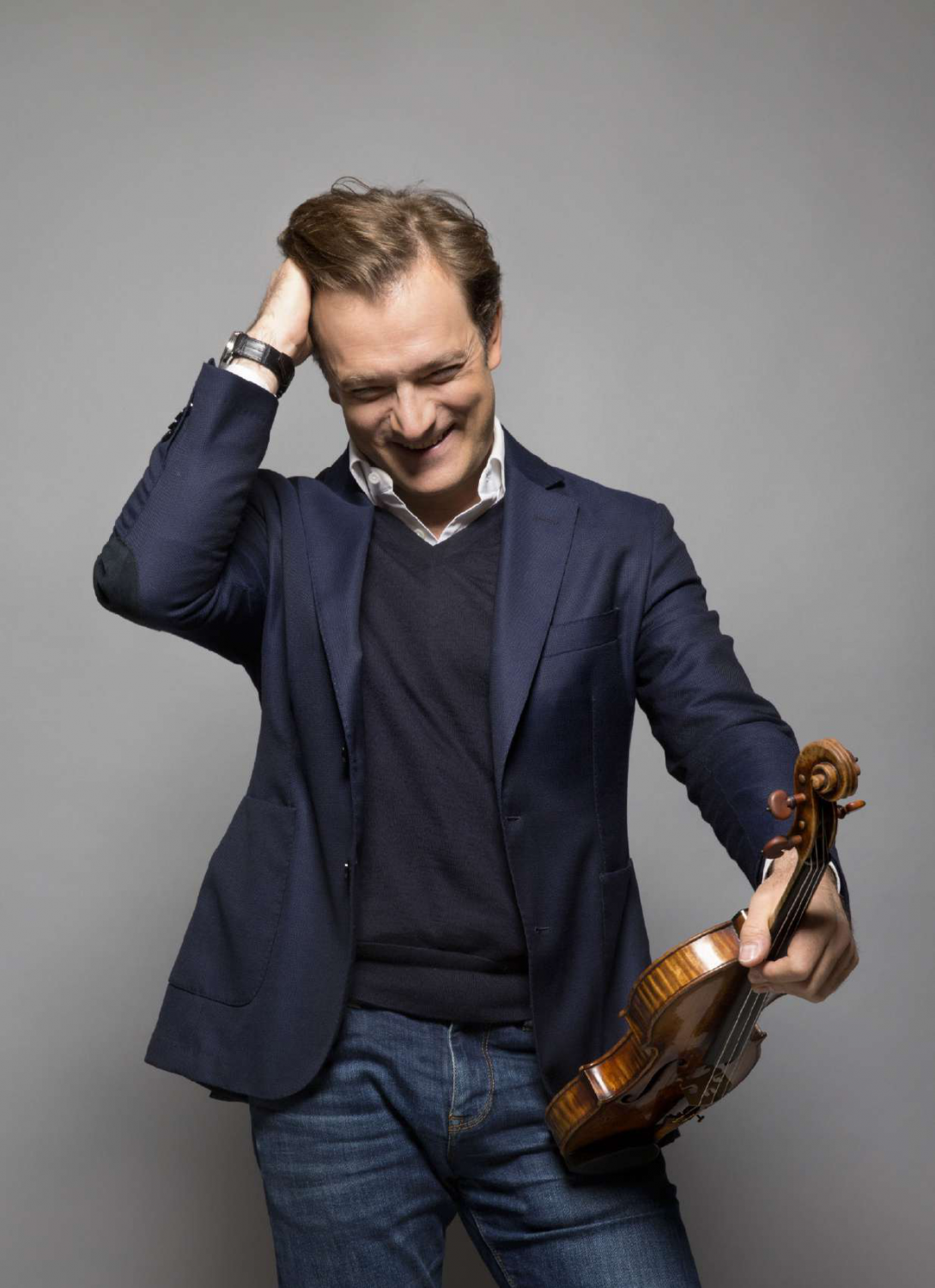 Renaud Capuçon is a world-renowned violinist and artistic director of the International Menuhin Music Academy (IMMA), the resident orchestra of Le Rosey based at its Rolle campus. In the Saanenland to perform a concert with the Menuhin soloists, Renaud carved time out of his packed schedule to talk with GstaadLife.

What attracted you to music as a child?
It was to play with other people. I always loved music and although I enjoyed my private lessons, I got really excited when playing with others. And this is what I’ve ended up doing my whole life.

Was it always the violin for you? Did you choose the instrument or did it choose you?
It’s very simple, actually. I was four at the time. I was in a class with other children, singing as a woman played the piano. My mother wanted me to play an instrument and asked the woman which one she would advise. “He has perfect pitch; try the violin,” said the woman to my mother. And that’s how I became a violinist.

It felt so natural straight away. But it’s important to stress that I was a really normal child. I wasn’t a genius like Menuhin. I was gifted, sure, but I was focused. I was the kind of child who could be very silent and attentive. Somehow the woman playing the piano must have noticed this … so it’s thanks to her that I discovered the violin.

Please tell me about your role as artistic director of the IMMA.
Yehudi Menuhin established the IMMA in 1977 with the aim of bringing together young musicians from different cultures, offering them a high-level musical education and the possibility to perform together regularly on stage.

My role is to oversee how this all comes together for the students. I am responsible for ensuring that everything goes well artistically speaking and I decide what programmes and concerts we will perform. It’s very exciting work.

I work together with a number of excellent teachers: three for violin, two for cello and two for viola. But the Menuhin Academy is about more than just working with young people and giving them musical training. We offer them advice and give them experience of playing in concerts together as a camerata, with me and with other teachers. They don’t just have lessons for their instrument; we also organise masterclasses with visiting artists. Next year, for instance, a composer is coming to work with them on his pieces. This means the Menuhin Academy students get exposed to a lot of different ways of seeing things in the music world, which is very important.

We also see it as our role to guide the students through the natural pressures they feel when performing. Last year, for example, I invited my manager to spend two days at the Academy, answering their questions on what their ‘concert life’ will be like, whether as soloists or members of an orchestra. Musicians are like athletes. From the moment a concert begins we have to be at the top of our form and stay focused 300% until the end. It’s so important to give them advice on these matters and to grow their confidence so they have a healthy outlook and can produce their finest work.

Does this help them to transition into becoming professional musicians?
Yes, exactly. We expose them to lots of different tools and situations so they become the most rounded musicians possible. You can’t just practice alone for eight hours a day then think you can play concertos. Of course you could from a technical perspective, but there’s much more involved if you want to have a satisfying career.

Most of my lessons are based on the concept of being free. Consider a tree: at the base it’s extremely grounded. Above there are branches, then higher up it becomes more open. This is exactly how a violinist should be: grounded at the base, while keeping your upper body completely free. Not only will you avoid physical problems in your shoulders and suchlike, but it also means the sound is more open. I always tell my students: consider what would happen if a singer pressed a hand against their throat as they sang. Well it’s exactly the same with a violin: if you push into the instrument with even a tiny bit of tension, the wood contracts and the sound is impacted.

Did you ever meet Yehudi Menuhin?
Yes, I met him in 1999, just before he passed away. I played for him and he invited me to play a concerto with him in Paris. That was planned for March 1999, but sadly he passed away just five days before the concert. But I was happy to have met him.

Aside from the fact that he was a real living legend to me, what most impressed me was the kindness in his eyes. He was quite old by the time I met him, but he had the eyes of a child: so full of energy and sparkle.

You must have a very full diary?
Taking into account the concerts, the teaching and the work on my two festivals, my diary is always packed. I play 130 concerts a year and am also artistic director of Les Sommets Musicaux de Gstaad and the Lausanne Chamber Orchestra as well as the IMMA. However, at least the travel is not too bad because all my activities are concentrated in Switzerland and France.

I’m really looking forward to the concert in Saanen on 14 August where I’ll be playing with all the Menuhin Academy soloists as a camerata together. We played together last week in Italy and it was wonderful.

Do you know the Saanenland well?
Yes! My first visit to the region was for the Gstaad Menuhin Festival about 15 years ago. I had heard of Gstaad by name, but that was all. I have to say I was completely taken aback. When you don’t know Gstaad they say it’s posh resort and you’ll only see piles of fur everywhere. I was surprised to find that the region isn’t like that at all. I felt embraced and welcomed and remember thinking: “OK if paradise exists, it should be here.”

I really see the human side of the place. There’s the village where you have everything you need, but more than that I sense a lot of respect between people. I feel whoever’s here can be at peace – you can be a walker from nowhere or a billionaire. Nobody sees the difference.

You’ve had a very impressive career. What’s been the high point to date?
I think the best thing is that every month and every year I’m excited about what the next month and the next year will bring, because it’s all new. When I begin new projects they’re challenges, such as when I became the artistic director at the Menuhin Academy, but all this brings me such joy because music is at the centre of it all. This actually goes back to your first question. The highlight for me is when I feel I can create something WITH people.

Whatever I do, whatever I play, I like to feel I am one step further forward – not in terms of being more famous or more rich - but of becoming more organically connected to the music. This is what makes me happy.

What are you working on next?
Lots of things! I’ve just recorded Vivaldi’s ‘Four Seasons’ with the Lausanne Chamber Orchestra, the CD for which will be released in September. I’m also working on lots of concerts including a world premiere in Paris and other projects that are too numerous to mention.

What would you say to people who don’t know much about classical music?
My advice would be to never ever think that classical music is for an elite, for special people or for people who are boring! Go to a classical concert the way you go to the cinema. It’s an experience. You don’t need to wear a tie. Go in jeans if you like. I say this because I STILL get asked: “but what should I wear?” Don’t worry about it – just go as you are. There’s still a lot of prejudice around classical music, but it’s for everybody. It’s for you, too.

We hope to see you more in Gstaad.
I’m French, but I feel so at home in Gstaad and so connected to the mountains that in a way I feel Swiss.

Earlier I told you I discovered music at the age of four, but what I didn’t say was that I was in a French ski resort at the time. This is what makes being in Gstaad so wonderful. Even though that resort and Gstaad don’t look at all the same, being here brings back feelings of home because of my strong association between music and the mountains.