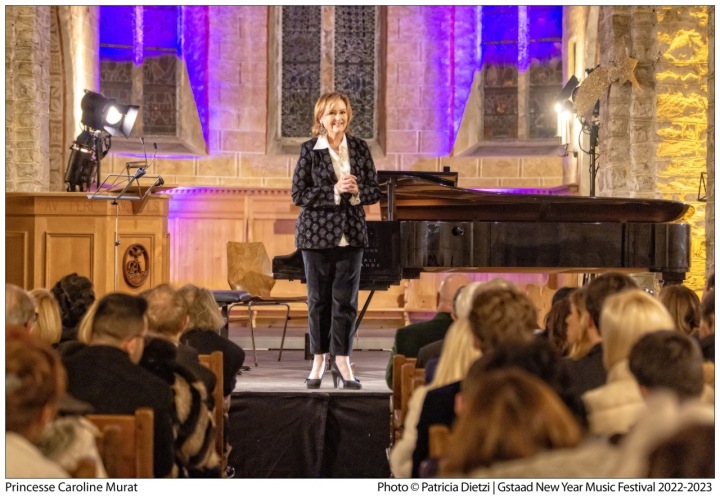 The artistic director, Princess Caroline Murat, was delighted to open the 17th edition of the Gstaad New Year Music Festival.

“Exsultate, jubilate” – under this motto and with a veritable shout of joy, this year’s Gstaad New Year  Music Festival began in the packed church of Rougemont.

She radiated joy, the mezzo-soprano Catherine Trottmann, at the opening concert of this year’s New Year Music Festival. The entire first part was dedicated to Mozart: from more festive works, the soloist moved on to joyful excerpts from the opera “The Marriage of Figaro”. And it was precisely this joy that artistic director Caroline Murat wanted to convey at the opening evening of the festival: “In the current conditions, which are actually dramatic, I wanted to set a sign of joy with Mozart – and I wanted Catherine Trottmann with her extraordinary talent to be with us!” It was far from certain that the young Frenchwoman with the warm colour of her voice would have accepted – after all, she can be heard these days, until the end of the year, at the Lausanne Opera as the leading actress in the musical My Fair Lady. So, of course, a piece from Frederick Loewe’s well-known musical could not be left out from the programme in the church of Rougemont: “I could have danced all night”, an impressive conclusion of the versatile programme.

Master of technique
Trottmann was accompanied throughout by pianist Magali Goimard and, for long stretches, by violinist François Pineau-Benois. The latter also contributed to the programme with his own solo interludes. The young Frenchman, who incidentally studied at the Paris Conservatory at the same time as Trottmann, had brought a wide range of works with him: from Mozart in the first part to Fritz Kreisler and Georges Gershwin. He captivated the audience with his technically brilliant performance. At some points, the audience could hardly follow the bow strokes with their eyes, so quickly did he play the sequences. He produced overtones and glissandi, plucked the strings, and generally elicited everything technically possible from his instrument. Depending on the piece, it had a classical-harmonic or jazzy-modern effect.

“I wanted two voices: the voice of the violin and the human voice. Because what instrument is closer to the human voice than the violin? Caroline Murat was also very satisfied with the announced “splendid voices of today” after the concert.

Harmony among the artists
The three artists have not worked together on this composition before. “We have only had three rehearsals together,” Catherine Trottmann quickly revealed before she had to go straight to the train after the encore from the “Merry Widow”, which would take her back to her engagement in Lausanne.

Pianist Magali Goimard summed up the evening once again: “It was a programme that exuded a lot of energy and was well suited to the artists’ personalities.” Indeed, the members of the audience were treated to everything from Mozart to French, slightly more exotic pieces that stimulated the imagination and encouraged dancing. Also, a piece by Strauss performed in German, light dissonance, and a jazzy feel in Gershwin and finally, musical sounds in My Fair Lady. A varied evening in which everyone – the audience and the artists – got their money’s worth.

BASED ON AVS | SONJA WOLF